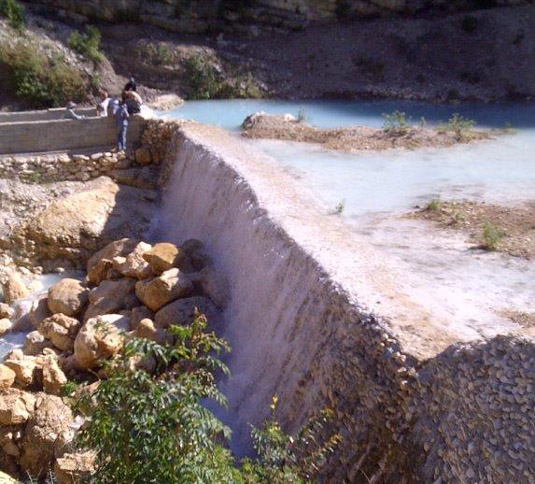 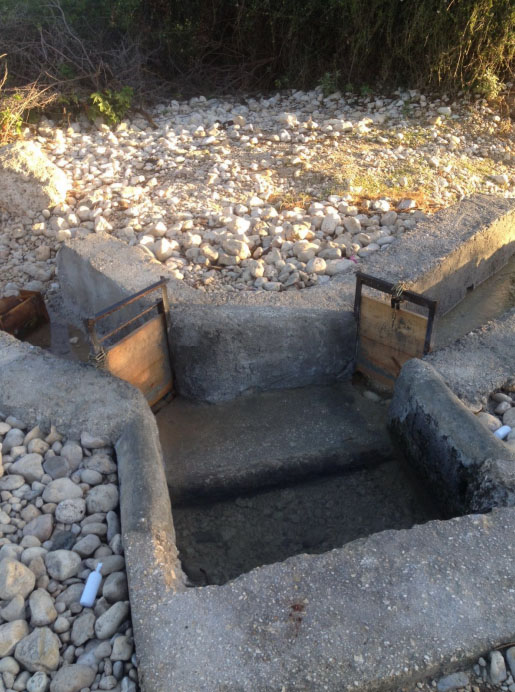 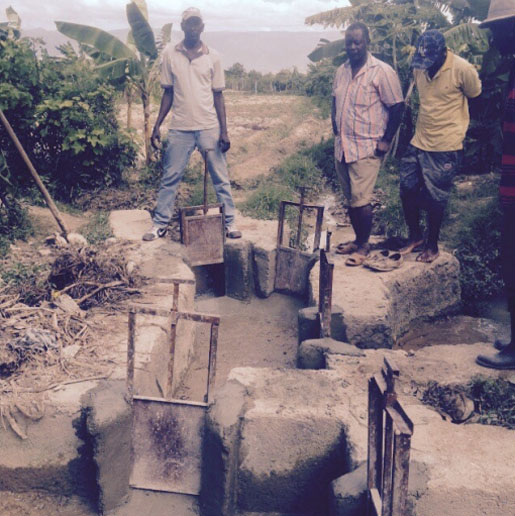 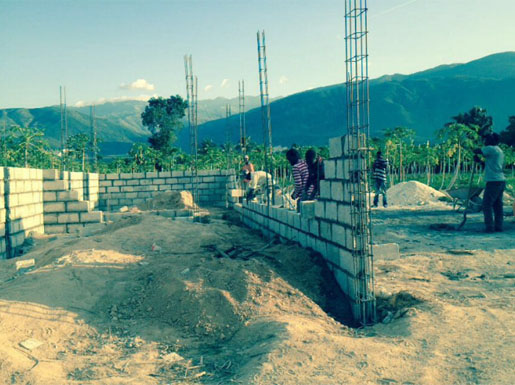 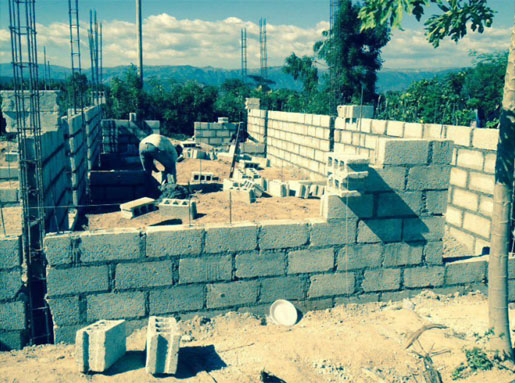 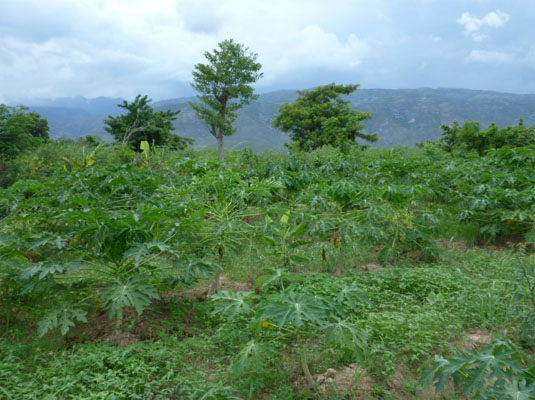 It’s been some time since I’ve written about what is happening in our Haiti project. The System Irrigation Lastic Fond-Parisien (SILF) has been quietly (mostly) clicking along.
I made two trips to Haiti in 2015. In the first trip in June, we did some surveying for other groups to advance their projects, and we also spent some time in Fond Parisien looking at the system, planning upgrades, working on the budget, and so on. While I was working around the system, my sons hiked back into the mountains with several guides to look for a spring whose piping system has failed. This system, known as “Ti Source”, or “Little Spring”, may become another work project at some time in the future.
The second trip was in October, where I spent my entire time with the system. The following report is a compilation of the two trips.
The entire Caribbean has been in a drought for several years. Jamaica, Cuba, Haiti & The Dominican Republic, and other similar islands have all been affected. In our area, the crops irrigated by this system were about the only crops for a number of miles. I would encourage you to read the Associated Press article we are attaching together with this report.
As is usual when I set down with our administrator, Tazino, to discuss the status of the system, we started with the ‘5 most pressing issues’. This has become our standard way to start focusing on what’s most important. During our discussions, we added several more items, so we really had ‘5 plus a few more pressing issues’. These where/are:

1. The committee has been using our Polaris Ranger for transportation, hauling supplies
around, etc. This is not the right machine for their use for several reasons. Nobody in the
area knows how to fix it, parts are not readily available, and it’s not heavy enough for what it’s being used for. Zack Toews from Oriani has been keeping it in good repair for us, but it’s expensive. We need to find a diesel 4X4 pickup that will be more in keeping with the local’s experience. $6000 – $7000 USD.

2. We rent an office in town, which costs us about $1000 USD per year. It’s not very well suited to what we do, and has no storage space for bags of cement, rebar, tools, etc. The village fathers have donated land to us right next to the police station, and the committee has drawn up plans for a small office and depot (storage place). Having an official office in a prominent place will also cement our status in the community as an official, ongoing, concern. This has been more of a concern to the SILF committee than it has been to us in North America. We might not realize the full extent of the cultural ramifications of the difference of being “official” and “unofficial”. We have been hesitant to spend what amounts to a number of year’s rent, but the committee ranks this pretty high. Budget $±8000 USD for 1st phase.

3. There are 26 farms across a small creek that have been mapped, and water rights assigned, but we need to build a flume across the creek to send get water to them. $750 USD.

A. The main entrance hatch to the main cleanout in the riverbed needs to be
strengthen and made easier to access for periodic cleaning, and while it’s being
worked on, we might as well do the annual clean up.

B. The canal in the canyon that connects the dam to the pipeline goes beneath a cliff that was formed when we blasted the mountainside. Debris is trickling off the cliff and building up beside the canal. Soon the available space will be filled, and it debris pile will spill into the canal. Since this looks like it will continue indefinitely, we need to cap the canal and turn it into a tunnel. Then the debris can continue to fall, and eventually spill off into the river canyon.

C. The canal feeding the Le Femme district needs repairs. It will take about 20 man days of work.

D. The fountain in Le Roche is giving trouble again. We will try again to get it working right.

We developed budgets for the above maintenance items totaling about $650 USD, which were approved on a phone call back to the US. I left that money, and most of the items are completed. In addition, several other small items have been repaired or upgraded. Most recently, several gates were concreted into several different places where the canals divide. These will greatly ease the moving of water from one area to another.

More recently, a donor has come forward to assist with the building of the Bureau, so we made plans to start that in February. Once we ready to begin, in typical Haitian fashion a dispute arose about the ownership of the land that was mentioned above. To avoid a prolonged fuss, a local farmer gave us a corner of his field, and this work is progressing along quite well. It is not in the heart of town, but it is along a main road and well situated relative to the irrigation areas.

Other happenings of significance

One of the more exciting things that happened last year was official registration of SILF as a legal entity. This means we can now open a bank account, and those kinds of things. Since the bank we deal with has now opened a satellite branch in our town, we can also do the banking without going to the capital, and the risk of crime is much reduced.

I have also been trying to get personal paperwork done for approximately two years. As of June 2015 I now have a drivers’ license, and a NIF, which is the rough equivalent of an American SSN or a Canadian SIN. This makes some aspects of life in Haiti a little smoother. 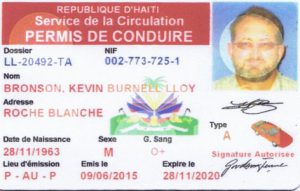 We also started a census of another farming area to the northwest of our district. We have enough water to serve that area, and it is technically quite feasible to get water to it. There is a canal system there that used to be fed by a well that is now defunct. If we can get water to the canal system, it can be distributed to about 189 growers farming 245 acres. This would add about 50% to our land area, and the farms here are slightly bigger than average across the system. Most of this land is pretty good land, and we look forward to including it in the system. In our last Board Meeting we voted to make formal plans to connect to this area, and to develop a budget. We will work on this in the coming months.

We plan to start some formal meeting with the community soon as an outreach program to help them understand how the system works and the importance of working together with the committee. This is still not up to what we would wish.

We are also exploring the idea of forming a farmer’s coop that could purchase fertilizer in
quantity for better pricing, maybe help with marketing, work at improving crop genetics, and hopefully starting a micro finance program. We have already been able to get an agronomist involved to start a teaching program. Sometime in the future the coop may even be able to own a small tractor that could be used for some of the heavy farm tillage, and take some of the back breaking labor out of the system. If anyone would want to be involved in this type of forward looking projects, either with time or finances, we would love to start a discussion about the opportunities.

And to end the letter, the above picture is a field of young papaya. The land owner has aged to where he cannot farm this land, and has no apparent heirs. SILF decided to rent it on a crop share basis. The SILF employees work here on days in which they have no other tasks. Since they are all on salary, it really costs us very little. They will share the in the crop, and some will be sold. Much of the land has been put back into production after the water started, but due to various circumstances there is still about 20% not being farmed. This might be one way that we can get more land into production, and increase employment in the area at the same time. 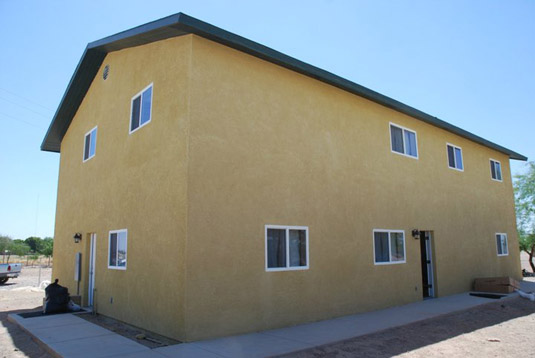 Images from the volunteer garden. 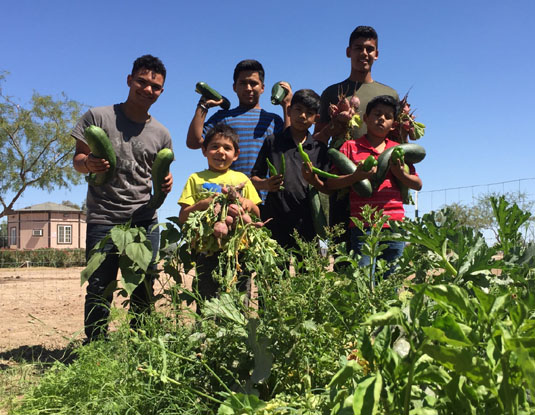 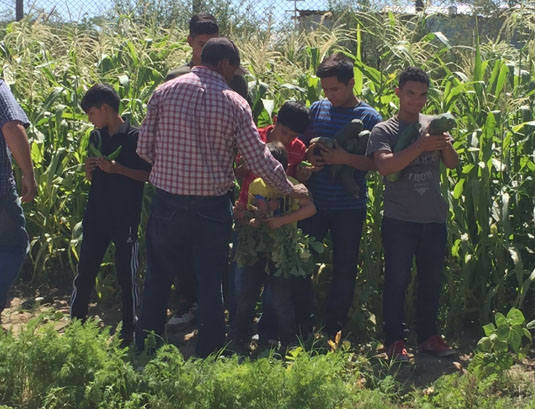 When you visit the orphanages in Mexico they are all saying the same thing. “We are being overwhelmed with new laws, rules and regulations.” The Mexico Baja California government has laid down the law and there are deadlines to meet. These new laws are being enforced by Fire Marshals, Social Services, Child Protection and Health Dept. There will be new record keeping, an office where these records will be kept, each child will have a personal physician, and a room for the doctor to see the children privately. There must be a visiting room with one-way glass for family visits. And so the list goes on, causing much stress and money problems.

We plan on helping where we can for the need is “great”. We will continue to help at Agua de Vida, with plans to construct a 30’ x 30’ building for office, medical and visiting space. The cost is approx. $35,000.

We are also involved with a water treatment plant at Shining Light Orphanage in Tecate, Mexico. Approx. cost $15,000. This last winter we put a garden in at Agua de Vida and also finished the laundry room, installing 4 communal washers. They are really enjoying the remodeled kitchen and the new laundry room. Mario and Veronica Santos are very thankful to all of Good News sponsors for all the money, time and effort given to the children of Agua de Vida. We at Good News also say thank-you to God and all our loyal supporters. We are a very “dependent” organization first to God, our leader and director, then to all of you, our givers of time and money. Without you we don’t exist. So a big thank-you and may we all send our monies into God’s treasury. 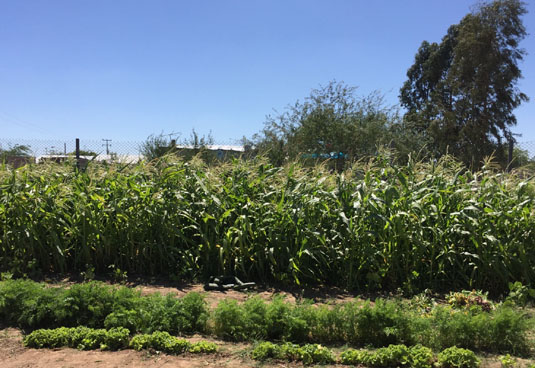 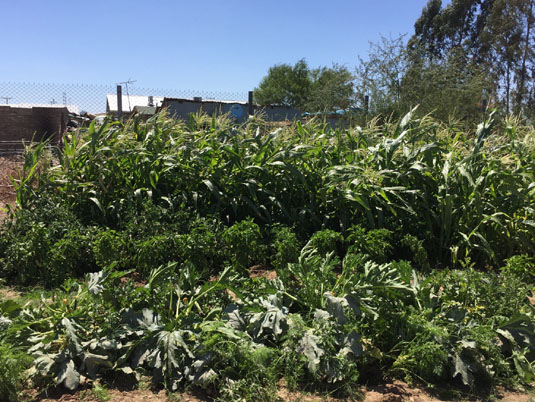